On Depression and Suicide: Recognizing, Understanding, Nevada Info and Resources- You are not alone!

On Depression and Suicide: Recognizing, Understanding, Nevada Info and Resources
You are not alone! 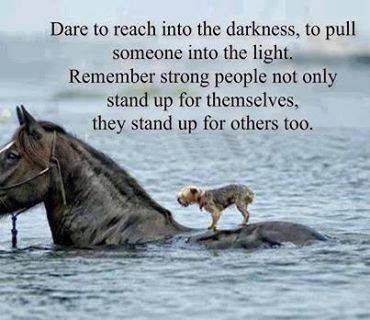 "The bravest thing I ever did was continuing my life when I wanted to die."
- Juliette Lewis.

Depression is a black hole. The longer you are in it, the deeper you sink.  The struggle becomes exhausting, a daily fight that can last months, even years.   Without help, it becomes a feeling of hopelessness and thinking things will never change.  The yearning to stop struggling can overcome hope and lead to suicidal ideation or suicidal behavior.

The Center for Disease Control and Prevention’s 2018 found Nevada has the highest rate of elderly suicide in the United States.  According to the 2018 America’s Health Ranking, the rate of suicide has increased from 19.4 per 100,000 deaths to 22.2 per 100,000. 50 elderly individuals aged 75-84 per 100,000 died by suicide compared to the 18.1 per 100,000 of the U.S. national rate. They also found older white or Native American divorced males are the most at risk group for elderly suicide.
“Researchers found that more than half of people who died by suicide did not have a known diagnosed mental health condition at the time of death,” the 2018 CDC press release said. “Relationship problems or loss, substance misuse; physical health problems; and job, money, legal or housing stress often contributed to risk for suicide.” 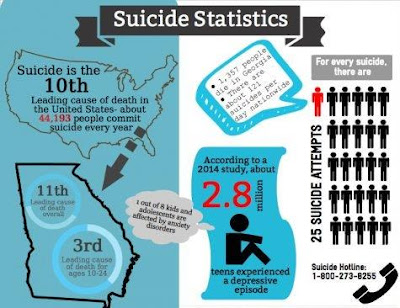 The American Association for Marriage and Family Therapy discovered approximately 40 percent or more of elderly suicides go unreported due to “silence suicides”— overdoses, self-starvation or dehydration and other methods, which can possibly be reported as accidents. AAMF reported the elderly are more at risk for a double suicide — a suicide where two spouses, friends or acquaintances take their lives at the same time.

The elderly population is not the only population with an increase.  According to the Centers for Disease Control and Prevention, the suicide rate for children ages 10 to 14 nearly tripled from 2007 to 2017, while the number of 12- to 17-year-olds who experienced a major depressive episode in the past year increased by more than 50%. 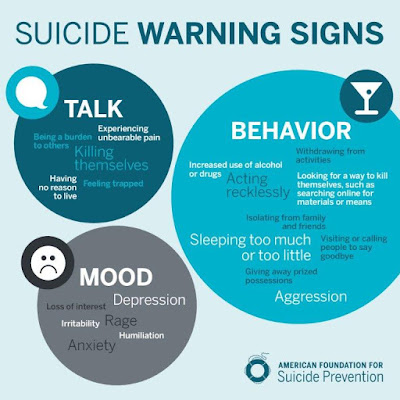 Teen who are depressed often struggle with anxiety and substance abuse as well, which is why early detection of the mood disorder can be tricky.

Symptoms of adolescent depression frequently differ from symptoms in adults. For example, youth may experience more irritability and moodiness, sleep at odd times of the day and isolate themselves from adults, particularly family members, but still long to be with peers. Adults, however, may experience insomnia, intense bouts of sadness and isolate themselves from both friends and family.
Tweens often get lumped in with older teens in studies, but they possess distinct characteristics and needs. Researchers reported in the journal Pediatrics that while 50% of parents were unaware of their 11- to 17-year old's suicidal thoughts, younger adolescents were more likely than older teens to deny their pain. Younger teens and preteens also are more likely to have trouble distinguishing between the normal mood fluctuations associated with puberty and clinical depression, and they’re more likely than older teens to have difficulty articulating their sadness.

In addition to varying with age, symptoms also differ by gender. According to a study published in the Journal of Family Medicine and Primary Care, girls report feelings of sadness, guilt, worthlessness, punishment, tiredness and low energy, while boys report more irritability, depression and suicidal thoughts. With all this symptomatic variation and conflicting information, it is easy to miss the warning signs and chalk up adolescent depression to “typical” teen behavior without taking it too seriously. 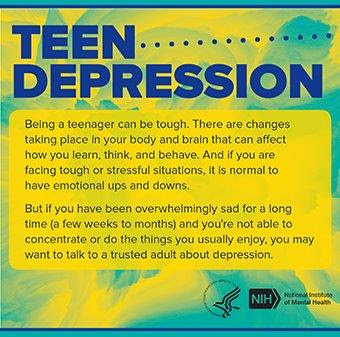 Accordingly, many depressed kids don’t get the help they need. The CDCP estimates that only 20% of youth suffering from a mental health disorder, such as depression, receive any treatment at all for their condition. This means 80%, approximately  12 million youth, are under-treated or not treated at all. This is clearly a major concern with adolescent depression on the rise.

One reason for the rise of depression is attributed to social media and being hyper-connected but without any real human connection.  Electronic devices are so entwined with youth’s lives that the real world and virtual world coincide. With over 95% of teens having access to a smartphone and 45% online "almost constantly," according to a Pew Research Center study, more and more teens are turning to the internet for social support and social comparison.  The recent research published in the Journal of Abnormal Psychology explained that the spike in depression, distress and suicidal tendencies may be connected to the social media trends among young people. For instance, it is not uncommon for youth to measure their self-worth based on the likes and comments they get from others, of course this is an inaccurate measure of one’s personal value. It’s no surprise that social media has been linked with negative psychological outcomes for youth.  The lack of in-person human contact leads to further feelings of isolation and hopelessness. 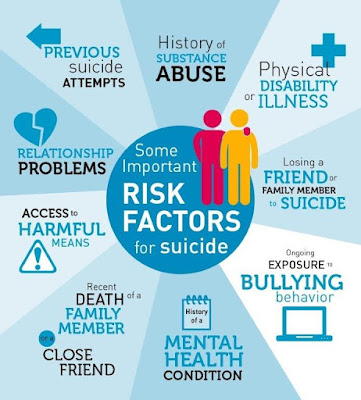 “There are far too many silent sufferers.  Not because they don't yearn to reach out, but because they've tried and found no one who cares.”
― Richelle E. Goodrich

To identify depression, experts suggest gathering clues. Is there a change in behavior or interests? Are they self-harming? Talking about suicide?  Taking longer to pull themselves out of a bad mood or depressed state?    While we all have periods of depression at some point in our lives, a period of depression lasting 6 weeks or longer may be clinical depression and symptomatic of a larger issue. Medical and behavioral treatment should be sought for help.

Listen. The first important step is to simply listen. Listening encourages the person to open and acknowledge someone is there for them, so that they'll tell you about feelings and thoughts of depression and hopelessness.  Don’t minimalize their feelings or concerns, take them just as seriously as they do. Let them know it is important to you too.

Ask. Encourage more conversation by asking more, which further shows that you care enough to know more about their struggles and depression.  Specifically ask: "Are you thinking about killing yourself?" This is one of the most important questions because asking decreases (not increases) suicidal thoughts. Asking about the possibility of suicide may save the person's life.

Love. Listening and asking show that you care. Listening with compassion and empathy and without dismissing or judging reflects love. That feeling of being loved may help someone reach out for help.
Act. Keep the person safe. Ask if they know how they would commit suicide and separate them from anything they could use to hurt themselves.

Work to put time and distance between the person and their chosen method, especially dangerous ones such as firearms and medications.  Ask to hold on to any medications or safety store weapons for them so they do not have ready access to them.

Stay with the person until the crisis passes or they're connected to resources that can help them. 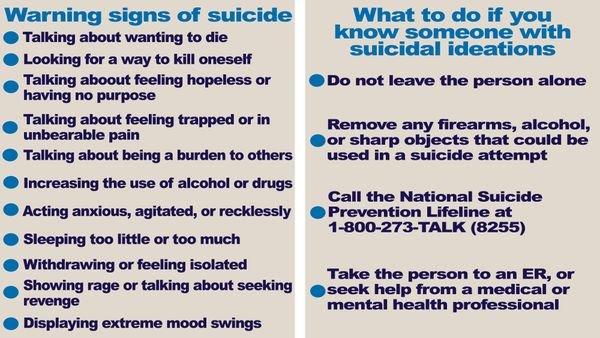 Link. If you think they might be in immediate danger, call 911.
Link them to National Suicide Prevention Lifeline: 1-800-273-TALK (or 1-800-273-8255) or Crisis Text line 741741 and text HOME.
The Mental Health CARE Team supports adults anywhere in Rural Nevada who need immediate mental health care and contact be contact 24/7 at 1-877-283-2437.
The Mobile Crisis Response Team in Nevada is also available 24/7 and in Rural Nevada may be contacted by calling 702-486-7865 or visit their website at knowcrisis.com
Link them to other people who can provide support. Research has also shown connectedness with others acts as a buffer against hopelessness and psychological pain.

And remember to follow up after the immediate crisis passes, and repeat: Listen, Ask, Love, Act.
Advocate. Get informed and get involved. Start conversations to reduce the stigma.

Everyone can help raise awareness about the suicide epidemic. Did you know that each day, nearly 130 people in our country die by suicide? Equally important is raising awareness about suicide prevention.

For more information, please call or contact Advocates for Victims of Abuse at (call or text) 702-343-2439 or 775-722-4564, email humboldtava@sbcglobal.net or visit our website at www.humboldtava.com 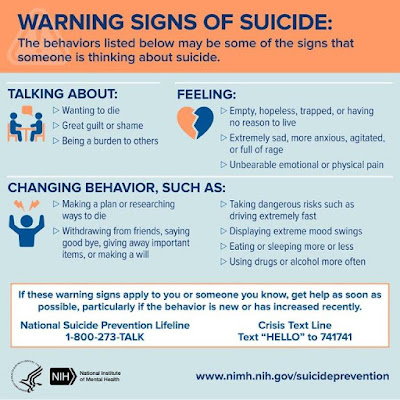 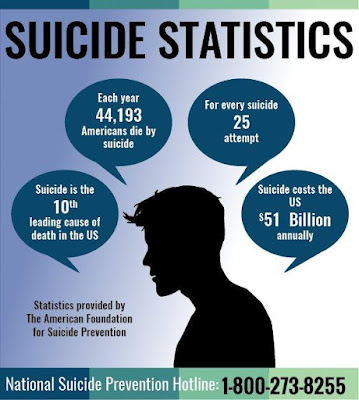