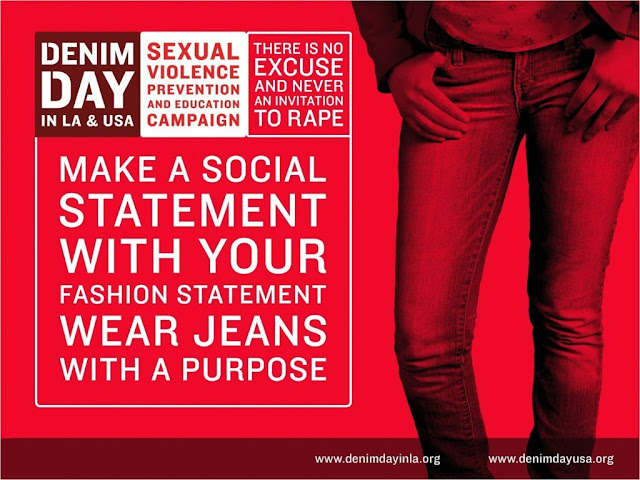 Make a Statement with Your Fashion Statement- Wear Denim in Support of Survivors!
Help Dispel the Myths Surrounding Sexual Violence!

Denim Day in will be held this year on . This campaign gives people the chance to make a social statement with their fashion statement while supporting survivors of sexual assault and spreading awareness about sexual violence.  will be continuing their support as registered participants for their 9th year by providing free ribbons to the community.

It all began in , 1990: An 18-year old girl is picked up by her married 45-year old driving instructor for her very first lesson. He takes her to an isolated road, pulls her out of the car, wrestles her out of one leg of her jeans and forcefully rapes her. Threatened with death if she tells anyone, he makes her drive the car home. Later that night she tells her parents, and they help and support her to press charges. The perpetrator gets arrested and is prosecuted. He is convicted of rape and sentenced to jail.

He appeals the sentence. The case makes it’s all the way to the Italian Supreme Court. Within a matter of days the case against the driving instructor is overturned, dismissed, and the perpetrator released. In a statement by the Chief Judge, he argued, “because the victim wore very, very tight jeans, she had to help him remove them, and by removing the jeans it was no longer rape but consensual sex.”

Enraged by the verdict, within a matter of hours the women in the Italian Parliament launched into immediate action and protested by wearing jeans to work. This call to action motivated and emboldened the California Senate and Assembly to do the same, which in turn spread to Patricia Giggans, Executive Director of Peace Over Violence, and Denim Day in LA was born. The first Denim Day in LA was in April 1999, and has continued every year since.

Organized annually by Peace Over Violence, Denim Day in LA and Denim Day USA recall an Italian court case that sparked international outrage when judges did not convict a rapist because the victim wore jeans. The judges ruled that because the victim was wearing tight jeans, she must have helped her attacker remove them, thus implying consent.

Since then, Denim Day in LA and Denim Day USA has grown to become a national movement held annually during April, which is Sexual Assault Awareness Month.
“RAPE IS A GLOBAL EPIDEMIC,” “WHEN DATING BECOMES DANGEROUS” and “NO EXCUSE” are three of the sexual assault excuses highlighted in the ads, which are designed to inspire a critical dialogue about violence prevention. Materials are available for purchase and to find or create an event in your area, check out their site at: Http://Denimdayinfo.org

Across , every two and a half minutes, someone is sexually assaulted. One in six American women have been the victim of attempted rape or completed rape. 82.8% of intimate partner rapes are NOT reported to law enforcement. This statistic also applies to Winnemucca. Then why aren’t many reported to law enforcement? There are several reasons and the biggest one being that the victim often knows the offender. There are worries of retaliation, fear the victim “led him on”, humiliation, and embarrassment. In a small town like ours, the word gets out quickly. Would you, readers, want everyone knowing about the worst, most invasive and very personal moment of your life?

Another reason is sexual assault exams are not performed locally in Winnemucca. A victim would have to travel to  for an exam. After a traumatic and very painful experience, many victims do not want to sit in a vehicle for that long to go through yet, another painful experience. Additionally, when a victim does choose to have a sexual assault kit done, they cannot urinate, defecate, eat, drink, chew gum, smoke, wash any part of their body, brush their teeth, or change clothing until after the kit is completed. Keep in mind, they must wait until the time of their appointment in Reno (sexual assault exams are no longer considered emergency, as they are often made by appointment now), complete the exam (which can take up to three hours), then drive back to Winnemucca to shower and rest. The reason for this is sexual assault kits are done to assist in investigation and prosecution of the offender. The victim is the crime scene. As a practice in empathy, can you, readers, understand why some victims choose not to go through this process?

The  is working to expel the myths surrounding sexual violence and help survivors understand that rape is never their fault. No circumstances, whether the couple is in a relationship, how the victim was dressed, whether alcohol or other drugs were ingested: nothing excuses sexual violence.

provides various programs, resources and referrals for survivors and secondary survivors of sexual violence, relationship abuse, child abuse and neglect, and bullying. Anyone wanting further information is encouraged to contact
will be holding their annual Denim Day celebration by making free denim ribbons available to the public. Denim ribbons are made available for those who may not be able to wear denim at work or for those who would rather show their support by wearing a ribbon. People may call, email, or contact us via our website to request ribbons and they will be delivered at no cost. Donations are happily accepted and appreciated!

For more information about Peace Over Violence and Denim Day USA, please visit www.denimdayinla.org, http://www.peaceoverviolence.org  or www.humboldtava.com, or email humboldtava@sbcglobal.net