Take a Stand, Don't Stand By!

Take a stand, don’t stand by! 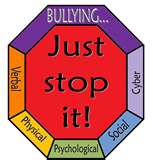 Did you know that more than 160,000 U.S. students stay home from school each day from fear of being bullied? It’s not only a problem for youths. Adults are more likely to use verbal bullying as opposed to physical bullying, and the goal of an adult bully is to gain power over another person, and make himself or herself the dominant adult. They try to humiliate victims, and “show them who is boss.” People who are bullied find it difficult to concentrate, show a decline in grades, and lose self-esteem, self-confidence, and self-worth. hose who are bullied report more physical symptoms, such as headaches or stomachaches, and mental health issues, such as depression and anxiety, than others.
Sadly, recent bullying statistics show that bullying is on the rise across all ages. The rise in bullying statistics is likely due to a sub-form of bullying seen in recent years called cyber bullying. Many bullying statistics and studies have found physical assaults have been replaced with cyber assaults in the form of bashing, rumors, and other content targeted at a single student or group of students to intentionally inflict harm.
Bullying Prevention and Facts:
• Many studies have shown that increasing domestic violence at home are leading to an increase in bullying online and at school.
• 58% of kids admit to never telling an adult when they've been the victim of a bullying attack.
• Bullying affects witnesses as well as targets. Witnesses often report feeling unsafe, helpless, and afraid that they will be the next target.
• Bullying is a communitywide issue that must no longer be ignored or thought of as a rite of passage. Students, parents, and educators all have a role in addressing bullying situations and changing school culture.
• The two keys to creating change are: increasing awareness that bullying has lifelong impact, and giving people the tools they need to respond effectively.
• Students can be especially effective in bullying intervention. More than 55 percent of bullying situations will stop when a peer intervenes. Student education of how to address bullying for peers is critical, as is the support of adults.
• Silence is no longer an acceptable response to bullying. Adults, students, and educators can no longer look away when they see bullying. Ignoring it won’t work. Everyone needs to be empowered with options to respond.


Based on the bullying statistics, it is clear that cyber bullying is on the rise more so than any other type of bullying. Many report seeing these types of bullying in chat rooms, social networking websites. Many students are forced to deal with at-school bullying and have it follow them home as they see hurtful comments and rumors being said about them throughout the Internet.
Again this year, the Advocates for Victims of Abuse has partnered with SASA (Students Advocating Social Awareness), and PACER Teens Against Bullying, to raise awareness across the country to STOP bullying now!
October is National Bullying Prevention Month. On October 12th, 201, join AVA in the movement to “Make it orange and make it end!” and unite against bullying. Make your color orange on Unity Day, Wednesday, Oct. 12. That’s the day everyone can join together: in schools, communities and online, and send a message of support to students who have experienced bullying. Students can unite against bullying on Unity Day by wearing the color orange, using the resources on PACER.org/bullying, handing out orange “UNITY” ribbons at school, or writing the word “UNITY” on their hands or binders.
Facebook is also partnering with PACER by posting information about PACER activities on its safety, educator, and privacy pages during October. Update your Facebook status to “UNITY DAY, October 12th— Join the movement to make it orange and make it end! If you are being bullied, you are not alone. Unite and be a champion against bullying! “Like” Unity Day on their Facebook page. Take a pledge and sign “The End of Bullying Begins With You” Petition at http://www.pacer.org/bullying/digitalpetition.


This is an opportunity for individuals, groups, communities to acknowledge that bullying is not something that should be accepted. Physical bruises fade, but the marks bullying leaves on a person may never fade. As human to human, we should reach out to one another to alleviate pain, not to cause it.